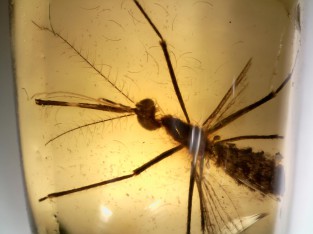 Ever since Jurassic Park was released back in 1993, the idea of dinosaur DNA trapped in mosquitos has been in the public consciousness. In the opening minutes of the film, a mosquito trapped in amber from the Dominican Republic is featured introducing the premise on which the film is set of dinosaurs being resurrected from DNA extracted from blood found within the mosquito’s stomach.

Michael Crichton, the author of the book on which the film is based, got this idea after reading about the reknowned amberologist George Poiner Jr’s research into attempting to derive dinosaur DNA from hematophagous insects. Although later research established that after millions of years any useful DNA will have degraded beyond recovery, it is still popular in the public imagination and the Jurassic Park franchise has carried the idea on in popular culture, if not within the scientific community.

Of course, as regular customers and amber fans will already know, Dominican Amber, being only 25 or so million years old, is too young to contain any inset that co-existed alongside dinosaurs, but it might also surprise some people to learn that mosquitos are actually surprisingly rare in amber.

Although there are many other sellers on ebay who frequently sell nematoceran flies in amber described as ‘mosquitos’ and the terms seems to be a popular colloquial word used to describe any nematoceran or ‘mosquito’ like fly, usually a fungus gnat or other very common insect inclusion, this is factually incorrect.

A mosquito is a very specific family of insects within the nematoceran order, known as Culicidae from the latin word “culix” or “gnat”. They can be fairly easily distinguished from other nematocerans by their very distinct piercing proboscis that is used by the females to pierce the skin and draw blood. They are notorious vectors for diseases such as malaria, and George Poiner Jr has indicated that the spread of malaria may have been a contributory factor in the decline extinction of dinosaurs, due to evidence indicating that dinosaurs declined over several millenia prior to the KT meteorite impact commonly thought to be the primary reason for the end of the dinosaur era.

Despite this, mosquitos are rarely seen in amber. Instead the most common inclusions are typically fungus gnats, beetles, parasitoid wasps etc. This might seem surprising, given how numerous mosquitos are within their environment, but then it also has to be considered why other insects, who aren’t much more common than mosquitos would end up in the position of being captured in resin in the first place.

Many insects are attracted to damaged trees including beetles and fungus gnats as a food source, other creatures, such as spiders and parasitoid wasps, are drawn to them in turn as prey or as hosts for their eggs, and thus were more likely to fall victim to the resin exuded from the tree as a defensive mechanism when damaged or attacked by insects.

The mosquito on the other hand, is drawn to warm bodies to feed upon, and unless there was a nearby vertebrate to feed upon, they had little reason to be near any tree resin. For this reason, genuine mosquitos are seldom found in amber, and also command a premium to collectors because of their representation in popular culture thanks to Jurassic Park.

Although they are known to exist in cretaceous amber from Burma I have, at the time of writing (September 2020) only ever seen them in Miocene amber from Mexico and the Dominican Republic, and only recently so, despite having been an amber collector and dealer for the better part of a decade and having handled thousands of pieces of amber over the years.

If you ever see me selling a mosquito inclusion in amber and you want to own one of these iconic and popular inclusions, you should consider snapping one up quickly as they are not inclusions I expect to have in stock all the time!