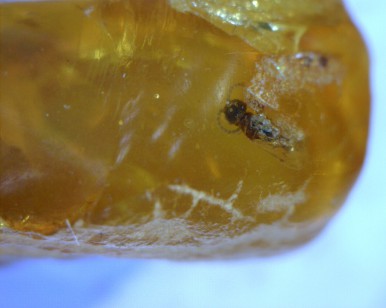 This type of amber is a class 1B fossilised resin that is found throughout the Raritan formation in the North-East United States, much of it is in New Jersey, but also parts of Maryland, New York State and Massachussets. For this reason, Professor David Grimaldi has put the case for this amber to be referred to as 'Raritan Amber' instead of 'New Jersey Amber' to reflect the existence of significant deposits outside of New Jersey.

This amber is fascinating for me because of its Cretaceous (Turonian) age. Before it was ascertained that Burmite was Cretaceous, this was probably the most widely available dinosaur era amber. During the heyday of the clay mining industry in the North Eastern United States, this amber was so abundant that pit workers packed it into barrels and burned it to keep warm durign the winter months! I shudder to think how many priceless inclusions would have been unwittingly and unknowingly consigned to the flames in such a manner.

Nowadays however, Raritan amber is considerably less abundant. The clay pits have closed and most have been filled in and forgotten. Most amber recovered in the area these days comes from building sites in clay or lignite layers which construction workers laying down foundations have stumbled across a deposit, or from exposed outcrops such as beach cliffs on the coast.

Unlike Baltic, Dominican, Mexican and Burmese Amber, supplies of included Raritan amber are sporadic and irregular and not a simple matter of re-ording off a regular supplier. For this reason, it is often difficult to find for sale anywhere and I rarely have more than a handful of specimens in stock at any one time, much of it derived by painstakingly (and carefully) polishing my way through a parcel of small, rough pieces of this brittle resin in the hope of finding one with an inclusion.

The existance of this amber was first noted in 1821 by Dr Gerard Troost, who described a large, clear piece containing scale insects. It must have been an impressive specimen, as most pieces tend to be quite opaque, small and brittle.

In 1967, what was then the world's oldest known ant (sphecomyrma freyis) was discovered in a specimen recovered from a seaside cliff in Middlesex County, NJ, some 20 years later, another hymenopteran inclusion, cretotrigona prisca was identifed by Michener and Grimaldi as the world's oldest bee, a record held until George Poiner Jr reported the discovery of an even older bee, melittosphex burmensis. In 100 million year old Burmite in 2006.

Paleobiologists intersted in this amber are lucky in that unlike many ambers, this resin is believed to have remained in situ from the time it was first buried under sediment to the time it was recovered, unlike some resins, particularly Batlic or Burmese Amber, which are known to have been often been carried far away from their original sites and reworked into teritiary aged deposits.

In addition to the amber itself, fossilised impressions of leaves, fruits, pinecones, wood and other forest remnants help to place the resin in the context of its original ecosystem and habitat.

Using palynological analysis (the study of spores, pollen and other polynomorphs) researchers were able to determine that NJ Amber was Turonian in age (approximately 93-89 M.Y.O). Chemical analysis at the begining of this century determined that the resin was orginally exuded from a tree of the cupressaceae family of conifer trees, which are more closely related to the Sciadopityaceae family of trees responsible for Baltic Amber resin than the Araucarian family it was originally thought to have come from, which would have given it more in common with Burmite, another Cretaceous aged amber.

Because of its brittle nature, Raritan amber is primarily of interest to collectors and researchers, rather than jewelers. In addition, it is particularly vulnerable to prolonged exposure to UV light and is best stored in a sealed container away from natural or UV light when not being observed.

Please visit my shop to find specimens of this amber for sale!