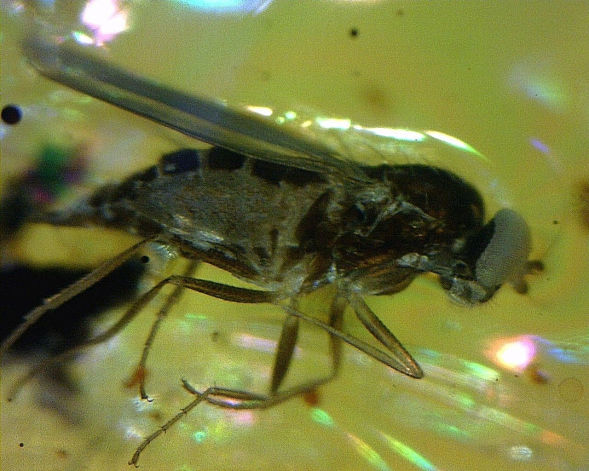 Mexican Amber is a type of Amber that was produced by the resin of the now extinct legume tree species Hymenaea Mexicana, which once grew in forests in what is now the Chiapas region of Southern Mexico 25-30 million years ago During the Oligocene-Miocene boundary period.

It is very rare compared to Baltic Amber (which accounts for 90% of amber production) and quite scarce compared to the related and contemporaneous Dominican Amber (produced from the related but also extinct Hymenaea Protera tree that once grew in what is now the Dominican Republic).

This tree is related to the still existing species Hyemenaea Courbaril, which still grows in central and South America. However, the living species the Mexicana tree is most closely related to is the Hymenaea Verrucosa, which is native to East Africa. Both of these existing trees are responsible for producing copal, a form of pre-amber resin which has not fully polymerised into Amber, a process which takes millions of years, replacing the volatile organic compounds with more stable, inorganic ones.

The resin was part of the defence mechanism for the tree, protecting it from disease and pests. The insects trapped within the amber were often harmful to the tree, and thus the resin was working as it was intended.

There arm many different types of inclusions found in this and other types of amber, including insects, spiders, leaves, bark, coprolites (bug faeces) and sometimes (though very rarely) vertebrates such as lizards. Generally speaking, the larger the bug/animal inclusion, the rarer it is, because larger creatures were stronger and thus better able to escape the resin before they could be engulfed.

Mexican Amber comes in many different colours, from yellow, yellow-orange, red (Chiapas Amber is best known for this colour) and green (which is the rarest). It also has quite a strong green-blue fluorescence, sometimes even the much sought-after blue fluorescence seen in rare samples of Blue Dominican Amber (which I also have for sale!). Mexican Amber was known to the ancient Mayans, and there is a 16th century Spanish account of the Mayan Emperor Montezuma II stirring his chocolate drink with an Amber spoon.

However, Mexican Amber has only been 'rediscovered' in relatively recent years thanks to the Danish Archeologist Franz Blom who despatched samples to the Berkley University in California, which prompted a difficult expedition to an isolated part of Chiapas which eventually led to greater exploitation of the amber resources there.

Today, the local native Tzotzil people typically dig the amber out of mines by hand and polish them to sell to outsiders in between harvests. The mining is a laborious process and relatively small quantities are produced each year. The Tzotzil used to prize the amber solely for its colour and flawlessness, and viewed the inclusions as flaws that had to be ground and polished away! Thankfully, the inclusions are now rightfully seen as a valuable and fascinating bonus for collectors and scientists.