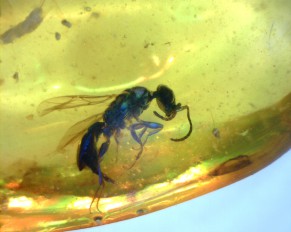 Burmese amber, or Burmite is probably my favourite fossilised resin type. The sheer fascination of holding a piece amber containing an insect or other arthropod that may well have once crawled or landed on a dinosaur's back, or even fed off its blood is unmatched by anything else I've ever held in my hand. On some level, it plays into fantasies of cloning dinosaurs that have existed in many people's minds since Steven Spielberg's 'Jurassic Park' was first released in 1993.

That movie, based on a story written by Michael Crichton, was itself based on a study published by the legendary amberologist George O Poinar Jr in 1982 suggesting that it was possible for DNA to have been preserved intact in amber, allowing for the possibility of cloning extinct species1. Subsequent research has sadly largely debunked the possibility of a 'Jurassic Park' style future theme park venture2.

In Crichton novel, and Spielberg's film, Dominican Amber was depicted as the source of dinosaur DNA. Dominican Amber, being Miocene in age, is far too young to contain insects that were contemporaneous with dinosaurs, but Burmite, which is approximately 98 million years old, dating to the Cenomanian era of the Cretaceous period is certainly old enough, and frequently contains haematophagus (blood feeding) insects such as ceratopigonidae (biting midges) sand flies (phlebotominae) or much more rarely tabinidae (horse flies) or cullicidae (mosquitos) which all had the potential of having fed on a dinosaur's blood all those millions of years ago.

Back when Chrichton wrote his novel in 1990, Burmite was not very well understood. Although it had been mined in the Hukaung Valley in Kachin State for thousands of years and used to trade with China, it was almost unknown to the rest of the world until British explorer Captain S F Hanney visited the area in the 1830s.

The German Chemist Otto Helm analysed samples of the resin in 1894 and determined that it was chemically distinct from the better known Baltic Amber and named the substance 'Burmite' after the region in which it was found.

Mining and research continued until the 1930s, when the mines where closed shortly before the Second World War, and they were not opened again for many years. Burmese amber subsequently fell into obscurity until 1999 when commercial mining recommenced.

The sudden availability of new material when the mines reopened triggered a flood of new investigation and research into this long neglected material, and since the dawn of the 21st Century, there have been many research papers published revealing some truly fascinating information that was previously unknown to paleobiologists, including the fact that contrary to common belief that Burmite amber was Tertiary aged, it was in fact, Cretaceous and thus, contemporaneous with Dinosaurs.

Although T.D.T. Cockerell first theorised that Burmite was Cretaceous as far back as 19173. Others assumed a Tertiary age based on the age of the rock matrix samples where often found in. However, when large scale mining recommenced in 1999, researchers were able to conduct more detailed investigations using fresh material, and found that some Burmite had in fact been reworked into Tertiary rock from older deposits. The discovery of a known Cretaceous era ammonite within a Burmite pebble and a phylogenetic analysis of other athropod inclusions seemed to back up Cockerell's assertion that the insects present in the amber were of classic Cretaceous type. Analysis of the lead isotope ratios within the amber-bearing matrix by Shi et al4 provided further confirmation that Burmite is Cretaceous and is now believed to be around 98 million years old.

No doubt had Crichton been aware of this back in 1990, Burmese Amber would have featured in his novel.

Nevertheless, Burmite is now starting to become better known outside of scientific circles. The recent discoveries of a dinosaur tail5 and a baby hatchling6 has been published in media outlets worldwide, increasing awareness of the existence of this fascinating fossiliferous substance with the wider public.

The resurgence of the amber mining industry in Burma (now Myanmar), still centred around the Hukaung valley in Kachin state, is leading to a steady and continuous supply of Burmite to be made available to craftsmen, researchers and collectors. Although it is not anywhere near as abundant as Baltic Amber, it is abundant enough to be affordable to most collectors, and the sheer variety of arthropod, botanical and other inclusions (such as enhydro bubbles) provide endless avenues of development of any collection or research path.

If you would like to purchase a specimen, please click on the 'shop' button at the top of the website which will take you to my eBay store!