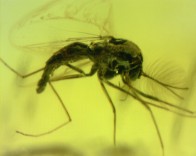 This amber type has been traded and used as a commodity, curiosity and decorative material since neolithic times, and in ancient times was traded throughout the known world, prized for its durability, relative abundance and beauty.

In ancient times, a popular myth was that amber was formed from the tears of Phaeton's (son of the Greek sun God Helios) sisters who were transformed into poplar trees and wept in mourning for their brother when he was killed by Zeus, the King of the Gods. The ancients where at least half-right when they deduced that amber originated from trees!

In reality, Baltic amber is formed from the fossilized of tree resin of conifer trees of the Sciadopitaceae family which lived in the Baltic Region of Europe 35-55 million years ago during the Eocene period. Most trees of this family are now extinct, though the Japanese Umbrella Pine (or Sciadopitys verticillata), a distant relative of the Baltic Amber tree, still grows in parts of Japan today.

The old sub-tropical forest that once grew where the Baltic sea, Finland, Poland and the Baltic nations now sit was also populated by other trees, including oaks, as well as many different arthropods, birds, lizards and mammals, many of which have left evidence of their lives within the amber produced by the Sciadopitaceae tree. Besides insects, spiders, millipedes and other tiny creatures, amber specimens also contain, albeit more rarely, leaves, flowers, mammal hair, feathers and even more rarely, small lizards!

Many insects and other inclusions were trapped in the resin as it oozed from the trees, and over a period of millions of years, the resin and its inclusions where polymerized, with volatile organic compounds eventually being replaced by more stable ones, preserving the inclusions. Baltic amber is also known as succinite due to the high concentration of succinic acid within its chemical make up. It is the most common type of fossiliferous amber. A common feature by which Baltic amber can be distinguished from other amber types is the frequent presence of oak-leaf flower hairs, and many of the inclusions can be observed surrounded in a white film formed from the decaying internal fluids of the insect which managed to seep out before the resin fossilised.

Baltic Amber is the single most common and widely traded form of amber of all commercially exploited deposits, and accounts for as much as 90% of all world amber production. As such, most fossiliferous specimens are very affordable, and a great starting point for anyone thinking of starting an amber collection.