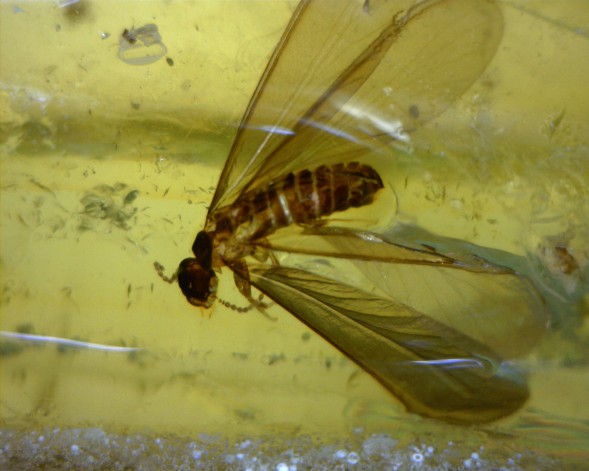 Colombian Copal is a hardened, part-fossilised tree resin that was exuded from the hymenaea courbaril tree, a relative of the extinct hymenaea protera and mexicana trees responsible for the creation of Dominican and Mexican amber respectively. It is named from where it is found, in Colombia, but deposits are found throughout South America wherever the courbaril tree grows, including The Dominican Republic and Brazil, which both contain deposits of this substance.

Copal itself is often known as 'young amber'. When the resin has been exuded from the tree, it falls to the ground and eventually hardens and is buried under the forest floor. Eventually, given time, it would be transformed into amber as the volatile organic compounds were replaced with more stable ones, making the resin much harder. One way of distinguishing copal is to dab acetone or pure alcohol on the surface of the specimen. Copal turns sticky when it is exposed to these solvents, amber does not.

The potential age of this copal is subject to debate. It is believed that some copal could well be over a million years old, but generally the consensus is that much of it is hundreds of thousands of years old. The crucial different between copal and amber is that had yet to undergo the process by which it would be turned into amber, a much harder and chemically stable form of hardened resin. Given that many extinct species have been found in this type of copal, some of this copal is undoubtedly very old. However, as the tree that produces this resin still exists, this hardened resin could be as little as 250 years old or even less.

This resin is often looked down upon because of its age, but the quality of inclusions you can get for the price is unmatched. If you want the excellent quality inclusions for a good price then copal specimens are certainly worth a look at.