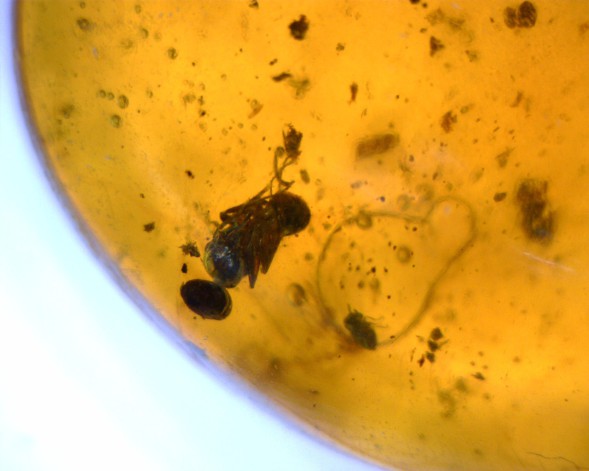 Stingless Bee in Dominican Amber
Dominican Amber is the fossilized resin of the Hymenaea Protera tree, an evergreen legume plant that once grew in prehistoric forests in what is now the Dominican Republic during the Oligocene-Miocene period somewhere between 40-25 million years ago. This tree is a relative (and maybe even the ancestor) of the existing Hymenaea Coubaril tree which still grows in the Dominican Republic and elsewhere in the Americas and is responsible for the copal that is also mined in the Dominican Republic.
The resin was part of the tree's defence mechanism against pests such as insects, which typically got trapped in the sticky resin and were preserved over millions of years as the volatile terpenes and other organic compounds were polymerized, turning first into copal, and then into amber, preserving the inclusions so that they look much as they did in life. Insects such as fungus gnats, beetles and spiders which lived on and around the Protera tree are some of the fauna inclusions you will typically find in Dominican amber.
Most of these insects measure no more than a few millimetres in length, larger insects and animals are less common, because they are more likely to have had the strength to pull themselves free of the toxic and sticky resin before they could be engulfed. Flowers, leaves, seeds and even fungal spores are also often found contained within amber, as are copralites, or fossilised insect dung, which are also particularly common in Dominican amber. Dominican amber is typically found deep underground, and extracted through the use of bell pits (essentially crude holes dug crudely into the ground).
In addition to insect and other inclusions, Dominican Amber is know for the wide variety of colours it comes in, which, depending on the impurities contained within, show off a different colour to the usual yellow/orange when held up to sunlight. Of these colours, blue is the most highly prized, and also the rarest. It is thought to have been formed as the result of anthracene and other compounds associated with forest fires that interacted with the Hymenaea resin to produce the colour. This phenomenon is never seen in Baltic amber however, as the Sciadopityaceae tree family that produced the latter has a resin with a different chemical composition. 'Ordinary' Dominican Amber, whilst not rare, is considerably less common than Baltic Amber, which constitutes between 80-90% of annual amber production. It is nevertheless still quite affordable with common inclusions, and it does produce some of the highest clarity and best preserved inclusions of all types of commercially exploited amber.