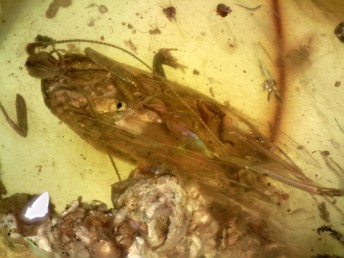 Ethiopian Amber is a fairly recently discovered fossil resin that was first reported by Schmidt et al in the Proceedings of the National Academy of Sciences (PNAS) in April 2010.

The deposits for this amber type were discovered in the Debre Libanos Sandstone Unit near a town called Alem Ketema north of Addis Ababa.

Initially, it was thought that this amber was Cretaceous in age due the assumed age of the Debre Libanos Sandstone in which it was discovered, despite the fact that analysis of the material determined that it was a Class Ic resin with a high amount of enantio-labdatrienonic acids in its chemical make up, in common with Miocene aged Dominican or Mexican Amber, and may suggest that the biological origin of the resin is a hymenaea or related tree within the legume family of trees, although at this early stage, the true identity of the tree of origin is unknown.

However, later research (September 2016) published by David Coty et al in the Annales de la Société entomologique de France International Journal of Entomology has subsequently determined that Ethiopian amber is Cenozoic in Age. Suspicions that Ethiopian Amber was not as old as first thought (other than the fact Class Ic resins are unknown from the Cretaceous) were first raised when an ant inclusion of the melissotarsus genus was discovered in one of the amber specimens purchased from a local merchant.

Based on phylogenetic mapping of the melissotarsus ant, a technique which analyses the evolutionary origin of a species, it is considered unlikely that this ant genus existed during the Cretaceous period, and testing using ATR-FTIR analysis (which determines how a material absorbs/refracts infrared light) suggested that Ethiopian Amber's maturation level was too weak to be considered Cretaceous in age and was more likely to be Miocene in age, in common with other Class Ic resins such as Mexican and Dominican Amber.

Although it is likely not as old as first believed, this is still an exciting discovery, and research into this amber type is still in its infancy. Many different arthropod inclusions of as yet undescribed species have been discovered, and botanical inclusions belonging to the cheirolepindiacae & Podocarpaceae families of trees give some indication of the kind of trees that shared the forest with the undetermined species of tree responsible for producing the amber.

If Ethiopian Amber is indeed Miocene in age than the presence of cheirolepindiacae pollen grains is of paleobiological significance because it was previously thought that this family of trees became extinct some time during the late Cretaceous or Early Paeleogene. If the identity of the pollen grains discovered in Ethiopian Amber is accurate, and the Miocene age of the resin confirmed, it would be a stunning revelation in the field of paleobotany if it can be proven that this family of trees managed to survive much later than previously thought.

There is no doubt that there will be many exciting discoveries and revelations yet to be made that will fundamentally change our understanding of how life evolved during this period.

This is a fascinating amber type, and many specimens have a green colouring under normal light that is unique to Ethiopian amber. It is at this stage, not widely known about and an incredibly exciting new field for collectors and researchers to investigate.

If you would like to see if I have any Ethiopian Amber specimens in stock. Please go to my eBay shop to peruse any specimens I may have for sale.