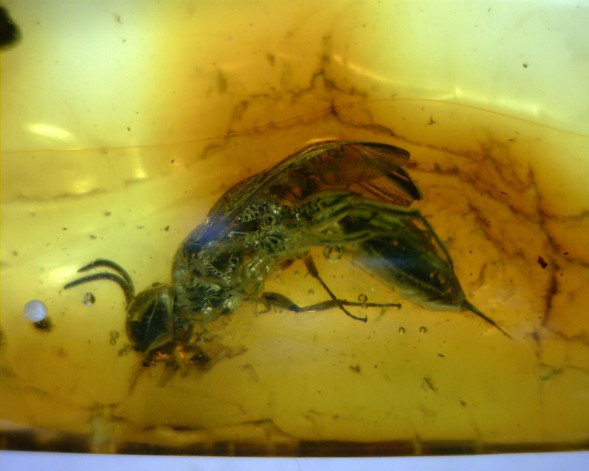 Sphecid Wasp in Eocene Baltic amber
Anyone who has watched Ridley Scott's Sci-Fi horror film 'Alien' and its sequels will be aware of the concept of paristoidism, in which a creature injects its host with its young, which will then devour the unfortunate victim from within before emerging and killing them. Whilst, fortunately, humans don't have to deal with the horrors of parasitoidism, in the arthropod world, many insects, spiders and other inverterbrates are not so lucky, and in addition to having to avoid being eaten by predators, have to contend with potentially falling to this grim and unenviable fate, usually at the hands of wasps, nature's very own insect xenomorphs.
Bees, Ants and Wasps

Wasps belong to the Hymenoptera order of insects. The name of this order comes from the fact that that the wings on many of these creatures resembled a vaginal hymen (which is itself named after the Greek goddess of marriage) and is combined with the greek word 'pteron' meaning 'wing'. This order first emerged in the Triassic period some 230 million years ago, whilst the first identifiable wasps with their distinctive 'wasp waist' emerged during the early Jurassic Period some 200-205 million years ago, making wasps as old as the dinosaurs. As with all hymenoptera, winged variants of these insects have two large forewings and smaller rear wings.

There are 100,000s of wasp species in existence on every continent, with many more that are now extinct. Ants, sawflies and bees also belong to the hymenoptera order, and some entomologists view them as types of wasps. Bees, those cuddly, fuzzy, eusocial and strictly vegan hymenoptera cousins of the wasp are themselves thought to be descended from crabonidae predatory wasps that gravitated towards vegetarianism after many generations consuming pollen covered insects until they eventually began to consume pollen as their primary food source. Ants are entirely eusocial creatures that cooperate with others of their species to build nests, protect and provide with food. All centred round a queen that is soley responsible for reproduction. Some waps, as with their bee and ant cousins, are also eusocial and organise themselves much like ants and bees do by building nests or hives, which they will defend aggressively from anyone or anything that dares to venture too near. The wasps that we all know and hate, such as yellowjackets and hornets, belong to the vespidae family of wasps, as do almost all eusocial wasp species. Whilst these wasps are the biggest nuisance to humans, their existence and life-cycle is not the most terrifying compared to their solitary cousins.

The parasitoid wasp group contains many, many thousands of families, genres and species, but they all have one thing in common. In order to reproduce, they must infect a host creature with their eggs.
In order to do this, the wasp must attack the host (or its eggs) with its ovipositor (or sting), injecting venom in order to subdue the creature and allowing the wasp to infest it with its young. In the case of wasps of the ichneumonoidae superfamily, they will also infect the host with polydnaviruses (pronounced 'poly-D.N.A.-virus') in order to suppress the immune system and prevent it from attacking and killing the egg. These viruses evolved alongside the wasp in a mutually beneficial way, and have become integral parts of the wasp's own chromosomal DNA, one of the few instances in nature were viruses are of benefit to the carrier.
After hatching within the host, the wasp larvae will not kill the host straight away. It will in fact try to keep the host alive for as long as possible by avoiding eating its most vital organs until it is almost ready to emerge, like xenomorph chestbursters, from the hollowed out shell of its victim. Some wasps, notably the tiny chaclid family are hyper-parasitoids which attack other parasitoid wasps.

Charles Darwin, the famous Victorian naturalist spent some time observing the life-cycle of ichneumonoidae wasps, and was so appalled at the obligate cruelty inflicted on their hosts that it contributed to his loss of faith in God. In a letter to the American naturalist Asa Grey he wrote:
“I cannot persuade myself that a beneficent and omnipotent God would have designedly created the Ichneumonidae with the express intention of their feeding within the living bodies of Caterpillars...”
Yet, despite the horrific concept inherent in their existence, they are so vital to our ecosystem that we would die of starvation if they were to disappear. Not only to they keep pest insect populations in check through their parasitoid activities, but thanks to their subsequent nectarivorous diet, they are important pollinators of plants and crops. In other words, though we may not like them, we still need them much more than they need us. Indeed, our existence is often detrimental to theirs even if it is vital to ours thanks to the loss of habitat and unbalancing of various ecosystems upon which many of them depend.

Though most wasps are harmless to humans, some, as most will know, are capable of inflicting painful stings when they or their nests are threatened. Yellowjackets and hornets are the most notorious for this, and will inflict a painful sting when provoked, and will attack en masse in a potentially fatal manner if disturbed near their nests. However, the stings from these wasps are nothing compared to those of some lesser known solitary wasps. An American entomologist of extraordinary bravery (or questionable sanity, depending on your perspective) Justin O Schmidt, decided to experiment on himself to create a 'pain index' of 0-4 in order to measure the painfulness of various insect bits and stings. Zero means 'painless' and four means 'rolling around on the floor screaming in agony and begging for death'. Your average bee or yellowjacket wasp sting registers 2 on the Schmidt Pain Index, which many who have experienced this will tell you is painful enough, but it gets much worse.


One variety of solitary wasp from the mutillidae family known as 'velvet ants' (on account of the female's winglessness and 'fuzzy' appearance) is not only heavily armoured, but has a sting so painful that it is often referred to as a 'cow killer' ant because it was believed to be so powerful it would kill cows unfortunate enough to step on it. This ant, alongside the paper wasp, registers 3 on the Schmidt scale. However, even these wasps are exceeded by a wasp belonging to the pompolidae (spider hunter wasp) family, known as the Tarantula Hawk. This bright blue, orange-winged solitary wasp, growing up to 5cm in length, reproduces by swooping down on giant tarantula spiders, or even charging straight into its underground burrow) subduing it with its paralysing sting, injecting it with an egg and then burying it alive so that the larvae can develop undisturbed within the still-living spider. A sting from this wasp registers 4 on the pain scale, and is described as;

'shockingly electric, like dropping a hairdryer into your bubble bath'.

Another researcher also described the pain as;

"…immediate, excruciating pain that simply shuts down one's ability to do anything, except, perhaps, scream. Mental discipline simply does not work in these situations."

It is perhaps fortunate that this wasp is quite docile and unaggressive (unless you are a tarantula of course).
It must be noted that for his pioneering work, Schmidt was overlooked for a prestigious Nobel Prize, but must have been consoled by the fact that he was co-awarded the 'Ig Nobel' prize for biology in 2015 for his painfully amusing contribution to the field of entomology.

And so there we have it. Wasps, despite the terrifying nature of their existence that caused Darwin himself to question the very nature or existence of God, and which often capable of inflicting stings of tremendously hellish suffering are an essential part of our global ecology and even our survival. In one sense, it could be seen as depressing, though nevertheless fascinating. If you visit my shop, you can usually find genuine fossilised specimens of these creatures frozen in time for millions of years. Sometimes with their stingers extended in a futile attempt to defend themselves from whatever was trying to envelope them when they died, as seen with the sphecid wasp illustrated.